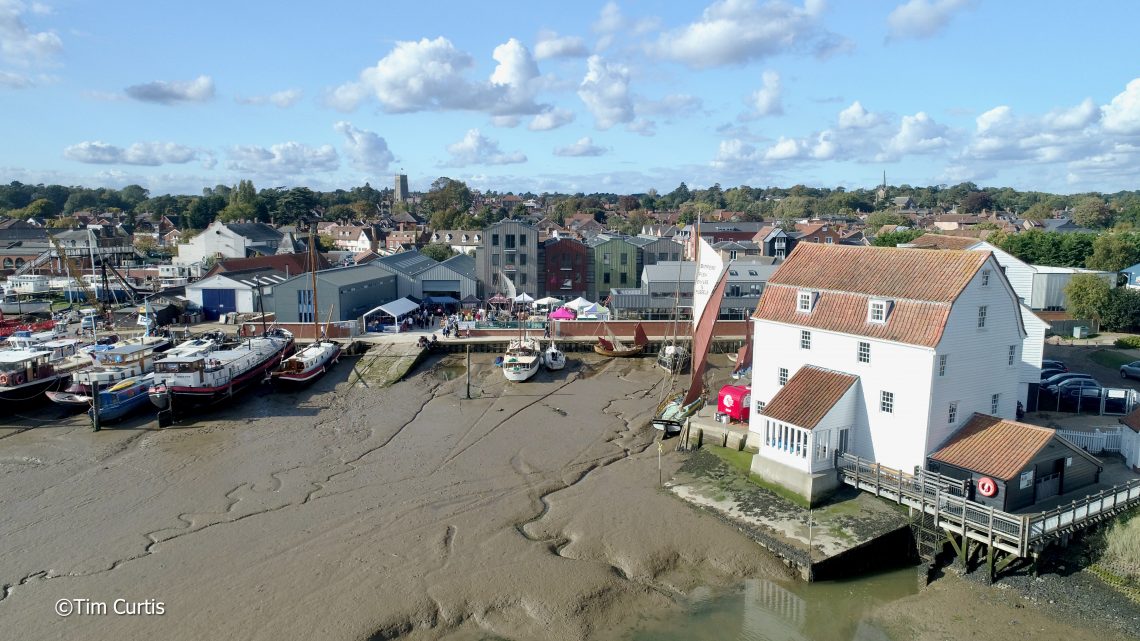 Although Woodbridge has a maritime history stretching back beyond medieval times, it is not until the Tudor period that we get a clearer picture of shipbuilding in Woodbridge, centered on a good supply of oak trees from the heavy clay land around the Framlingham area.

In the Golden Age between 1625-38 eleven ships were built at Woodbridge, of which the largest were the Levent Merchant and Muscovy Merchant, both 400 tons. Their names suggest that these ships were built for long voyages.

The Deptford ship builder Phineas Pett built ships for the Royal Navy and came to Woodbridge to buy trees. He used to lodge at the Crown Inn, when the landlord was Thomas Cole. Pett arranged a marriage between his fifth son Peter Pett (1610-1672) and Cole’s daughter. Through marriage to Cole’s daughter, Peter Pett was given the ownership of the Crown Inn and the Lime Kiln Dock. The marriage was in 1633 and, surprise, surprise, that year Peter Pett got the contract to build the first ship for the Royal Navy at Woodbridge.

The Pett family fell out with the Admiralty, as they were accused of cheating, but Woodbridge had become accepted as being a good place to build ships for the Royal Navy. The largest ship built at Woodbridge, on a slipway, where the cinema is now, was 663 ton Kingfisher in 1675. These were sizable ships and they were towed, by large rowing boats, to Deptford where they were fitted out in the Royal Dockyard.

Woodbridge was established as a shipbuilding centre and developed all the skills needed to send a merchant ship to sea. Flax grown on farms in the Deben area was woven into sailcloth in the town and there was also a rope walk. By this time merchants in Woodbridge owned ships, and they were commanded and manned by men from the town.

This went on into the mid-19th century. The last merchant vessel built at the Lime Kiln Yard was the tops’l schooner Ellen in 1853. Later on the Lime Kiln yard was run by Garrard, but he just did repairs until the yard closed. Woodbridge had finished as a shipbuilding centre because local owners were buying softwood ships built very cheaply in the Canadian Maritime Provinces. These were sailed across with cargoes of timber and both cargoes and ships were sold in the United Kingdom.

Yacht building was really started by the canny Scot Ebenezer Robertson, known as ‘ ‘Khartoum’ Robertson. He wore the kilt and played the bagpipes. In 1884 he was going to Southwold on a train when he saw the empty Lime Kiln Shipyard and thought that he could build yachts there. Yachts were then the coming thing. He sent his son, A.V. Robertson, over to run the yard. His son, ‘Robbie’ Robertson, also carried on building yachts and became a much respected builder. This yard trained local men to be shipwrights.
Some of these shipwrights set up their own boatyards. The 12ft Woodbridge pilot boat, Teddy, was built in a shed in Lower Brook Street in 1877. This pilot’s boat was left in a shed for many decades and is now the oldest Woodbridge boat still afloat.

Claude Whisstock started the Whisstock’s boatyard in 1926, near the Tide Mill. (For the detailed history of the yard, follow this link: The Beginning of Whisstocks)

Everson started boatbuilding at the coal jetty below Ferry Dock and this yard is still in business as ‘The Woodbridge Boatyard’. He began building the first Woodbridge wooden class yacht, the Cherub, in 1931. Frank Knights started a boatyard on the Ferry Dock and traded here for many years, building beach boats and doing repairs. Other boat builders worked in sheds around the waterfront.